What are Child Entities and How do They Relate to Other Entities?Do I need an LEI when selling shares?Business Transparency: How to Create an Environment of TrustAnti Money Laundering (AML) in Banking: Everything You Need to KnowKYC in Banking: Why It’s Important and How to ComplyCorporate Structures Demystified: What You Need to KnowWhat is a parent company and how does it work?How long does it take to get an LEI?ISO 5009 – Identifying organizational rolesISO 17442 – Standard for LEI code structureESRB discusses the future of LEILegal Entity Identifier (LEI) vs Tax Identification Number (TIN) in MaltaWhat documents are required for LEI registration in Malta?How to get an LEI in Malta?Who is an LOU in the LEI Dimension?GMEI Utility vs LEI RegisterLapsed LEI – Why should you keep your LEI active?Who is an LEI Registration Agent?Are LEIs public?What is LEI transfer?Can an individual have an LEI?Do LEI numbers need to be renewed?Why is an LEI number required?How much does an LEI number cost?LEI Lookup – Fully dedicated LEI search websiteISIN to LEI mappingGLEIS | Global LEI SystemMiFID regulation | MiFID II LEIvLEIGLEIF | Global Legal Entity Identifier FoundationCompany Autocomplete by LEI RegisterOpen LEIEuropean Market Infrastructure Regulation | EMIRWhat is an LEI database?LEI Application – Apply For An LEI OnlineLEI Checker – Search Your LEI OnlineWho Needs An LEI Number?LEI Lookup for MT CompaniesLEI for TrustsLegal Entity Identifiers in CryptocurrencyLegal Entity Identifiers in KYCTrading and Investing For Beginners: Should I Trade Through a Business Entity or as a Sole Trader?Digital Identity Predictions for 2020The Future of Cybersecurity – DeloitteLegal Entity Identifiers in Digital CertificatesBroad Adoption of LEIs Could Save The Global Banking Sector US $2-4 BillionLegal Entity Identifiers for Government EntitiesThe European Market Infrastructure Regulation (EMIR) and Legal Entity Identifiers (LEIs)The FCA Will Take Pragmatic Approach to Supervising Reporting on Brexit DayAdoption of LEI in Payment Messages by the Payments Market Practice Group (PMPG)RegTech London – Event SummaryWhat is LEI-Search?LEI Register and RapidLEI Announce Official Partnership 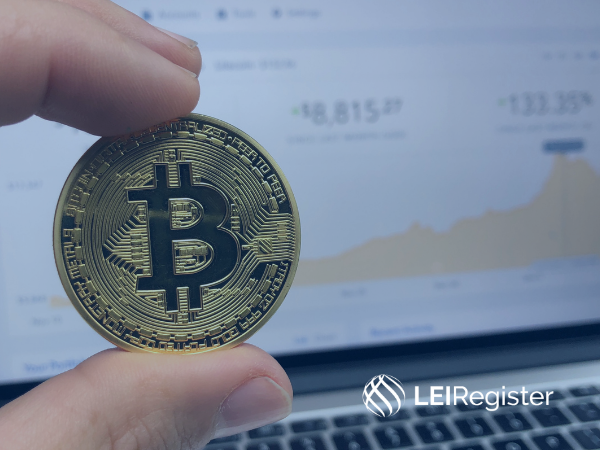 As cryptocurrency and the blockchain continues to get more press and more market spending, there are questions to answer about identity verification. Could Legal Entity Identifiers be the answer to some of those questions?

When we think about cryptocurrency, we generally assume most transactions are anonymous but most are actually somewhat less anonymous then previously thought. Bitcoin itself is better labelled as pseudonymous. Described well in a 2016 paper called “Virtual Currencies and Beyond, Initial Considerations”:

Blockchain currencies that are completely anonymous seem to have grown in popularity on the dark web and criminal marketplace. Cryptocurrencies like Monero and zcash, for example. It is this ability to anonymise cryptocurrency transactions that has paved the way for money laundering, terrorism finance and other shady transactions.

One such example is the case of Ali Shukri who was sentenced to 11 years in prison in 2015 after he provided instructions on how to use bitcoin to mask the provision of funds to Daesh.

The European Parliament have stated in a report titled “Cryptocurrencies and Blockchain”:

“The key issue that needs to be addressed in order to adequately capture cryptocurrencies and cryptocurrency players, particularly users, in legislation is to unveil the anonymity, varying from complete anonymity to pseudo-anonymity, that surrounds them.”

Identity as a general topic has three layers: organisations, people and things. All three must be identified in online transactions to create a truly secure environment. Blockchain isn’t the perfect place for identity information as it is decentralised and available on a large network. This creates a security risk when you add information about users and their identity attributes, such as addresses and financial information.

Legal Entity Identifiers can help with the organisation identity layer and because an LEI is just a 20-digit code, they contain no personal data. When it comes to digital transactions on the blockchain, LEIs can provide piece of mind for business entity identification as the banking sector could set-up processes to check transactions in the LEI database.

If the financial institution or entities maintain a database of transactions, then it is possible that an LEI can lead to entity identification and person identification in transactions. It would mean that the time it takes to trace a transaction is greatly reduced too.

Credibility in the Cryptocurrency System

Cryptocurrency is probably one of the most anonymous means of payment today, but is it not as anonymous as people tend to think. Cryptocurrency’s value is more in decentralisation. Satoshi Nakamoto’s famous paper was all about peer-to-peer networks. He surmised that if we put a transaction on a distributed network of many “peers”, then it would become very hard for a hacker to change or alter that data because they would have to alter it on each peer.

The fact that cryptocurrency has been abused in its early days should not be a deterrent. Cryptocurrency still has a place in protecting user and business data from financial crime but it alone won’t save you.

Cryptocurrency can gain wider recognition if we verify some information about ourselves and organisations doing transactions on the network. Legal Entity Identifiers go some part of the way to solve that challenge. It doesn’t mean that we’re giving away our data or freedoms. Instead, identity data will give more credibility/transparency to the cryptocurrency system and each transaction behind it. Whether or not the network is centralised, identities can still preserve the network’s independence and credibility because it will make life for the cybercriminals harder.

After all, that’s always the point of any online network – the more you keep it away from the bad guys, the better it works for the people who need it.

If you’d like to know more about Legal Entity Identifiers and how they work, visit this page.

Dear customer, there is a possible duplicate match between your application and Global Legal Entity (GLEIF) database. Please check the information below to confirm if this is your company or not.

In case this is your company information above, click YES to proceed to LEI renewal application. If you are sure this is not your entity, click NO and proceed with new LEI application.